Military Families in the Modern Era

Thanks to the person who posted the Boston Globe story about "flat daddy and Flat Mommy" today.
It is one of the most truly weird news items I've ever come across, but people seem to like it, at least the ones talking about it in the papers. Another modern military family issue is a new approach to helping families cope following the return of their traumatized loved ones. You can read about it here.
As I looked for more news items about this "Flat Daddy" phenomenon, I wound up at some military families websites. Those folks are quite concerned with a problem I hadn't seen much in the mainstream news (although I could have missed it): predatory lending to military families. If you'll read it, you'll discover that military families are victims of those paycheck loans that wind up costing more than the paycheck. There is currently a bill to curb some of this in the senate, and the military itself is a major sponsor of the legislation. The bill is currently in committee, having been called back by the senate banking committee (aka, the hirelings of the banks/credit card companies) who have gutted it. According to the 'Center for Responsible Lending" Press release:


Fed up with these predations, the Pentagon issued a report earlier this
month saying these predators bankrupt and ruin young soldiers. And that
wasn't all. Payday lenders are hurting the military's ability to defend the
country.
"Predatory lending," the report said, "undermines military readiness,
harms the morale of troops and their families, and adds to the cost of
fielding an all volunteer fighting force."
It called for a 36-percent ceiling on interest on payday loans to
members of the military -- the same cap many states impose in their usury
laws to ban loan sharks.
Assemblyman Ted Lieu (D-Torrance) then added the 36-percent cap to a
bill he introduced that had already passed the lower house of the
legislature.
The bill was about to go to the floor of the Senate for a vote when the
banking committee called it back. At this point the committee had a chance
to help the people who protect this country. Instead they went AWOL: They
stripped the 36-percent interest-rate cap.
The military, hoping to get at least some protection for service
members, is supporting the watered-down bill, but still wants the
36-percent cap.
It may get that, instead, from Congress. U.S. Senators Jim Talent, a
Missouri Republican, and Bill Nelson, a Florida Democrat, got the
36-percent cap passed in an amendment to a defense bill. While the payday
lobbyists stalk Capitol Hill, the amendment awaits its fate in a
House-Senate conference committee.

Here's an older story on the issue of predatory lending more generally, by David Sirota.

As someone who has struggled with compulsive spending and debt problems for many years, I feel a little bit like old Carry A. Nation when I read these articles about lenders hanging out around military bases looking for cash-strapped soldiers' families.
Posted by reb at 12:32 AM 2 comments:

Lyrics of the Week 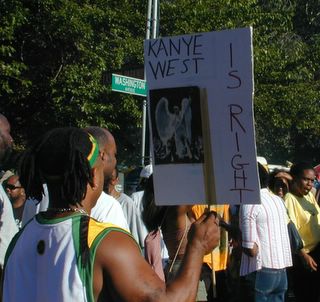 I just got done watching the first half of Spike Lee's documentary about Hurricane Katrina, "When the Levees Broke. It's hard for me to evaluate it with any critical distance either as a movie or from a political standpoint, but it was very moving and effective at bringing back all the pain of those terrible events last year. What worked most for me was the way that Lee reconstructed the sequence of events, so that information that had come out in bits and pieces over the year were put in their proper place in time, like that conference call video that came out in March. Watching those first five long days crammed into one hour really reminded me of how long it took before the National Guard finally went into New Orleans. The only thing I would criticiz in the documentary so far is that there are very few young people who are interviewed in the film and he doesn't talk to some of the more radical community activists who were there during the storm such as Malik Rahim, Mama D., and Jordan Flaherty. The only newsreporter in part one is Soledad O'Brien. It's not as if others weren't reporting on the story as well.
I was thinking as I watched it, that it was amazing to think that since 2001, we in the US have lived through the two tragedies of 9/11 and Hurricane Katrina. And now, every Fall is going to have a bitter taste. I was barely able to watch television coverage of Katrina last year because those images of the dead bodies floating by in the water spoke to such a profound level of indifference.
When I look at these two events together a few things strike me. While 9/11 became the source of jingoistic American patriotism, mentioned by Bush over and over again in every speech, Katrina is rarely mentioned. The Bush administration's main response has been to make empty verbal gestures toward the disasster while busily covering up its responsibility instead of taking an active role to improve matters.
Hurricane Katrina should be like my generation's Birmingham 1963. A year ago it was a televised trauma, a shocking picture of the violence of American racism. And significant numbers of people have gone to New Orleans to help the recovery effort. But immediately after, too many were caught up in diversion and distraction, too busy discounting "conspiracy theories" about blown up levvies (an idea which Lee deals with well in the film) and looking to blame individuals, when the devastation of that hurricane was not only in total failure of Michael Brown and FEMA, but the long-term inequalities, defunding of public services, particularly for AfricanA-Americans and other racial minorities, and total indifference to environmental realities that prepared the way for the disaster. As this recent report from Stanford found, "Katrina Did Not Raise Awareness about poverty."
* * *
These realities have not gone away, and because of them the problems in New Orleans continue.
Posted by reb at 11:28 PM 2 comments:

Late to Catch onto the Anxiety Index...

I guess everyone but me has heard about the manatee that's been hanging around the Chelsea Piers. It's almost as cute and fun an animal interest story as the snakehead eel or the tanuki on the bus, but as troubling as the recent catch of a Mediterranean swordfish in England's North Sea.
Now, in both the cases of Manatee and Swordfish there are previous incidents of sightings of such creatures in Northern waters...but they are pretty few and far between. Two odd ones in one summer strikes me as a bit strange. So, I hope I've given you something to worry about, because gawd knows, the Middle East isn't enough.
Posted by reb at 1:01 AM 3 comments: 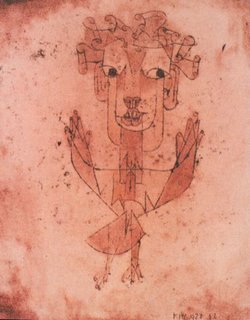 I haven't done an edition of the "Anxiety Index" in a while, but I have an all new series to start now: "Crimes Against History" in which I randomly view historical movies/popular books, etc. and comment on their disgusting white-washing of the past.
I was motivated today by "Come See the Paradise," which is about the Japanese internment during WWII. In addition to having some of the clumsiest exposition I've ever seen, the movie gets one of the most famous facts of US history WRONG.
The movie was going along steadily, sort of like a good little textbook when the dreadful gaffe was made. As she was narrating the story to her young daughter, the Japanese heroine of the movie, Lily says that the Supreme Court ruled that the internment camps were unconstitutional, and that therefore all the internees were freed. It bugs me that a film-maker with a budget big enough to make sure that the costumes and cars were correct could not bother to figure out that the Supreme Court decision in 1944, Korematsu vs. United States was that the camps were constitutional. It wasn't until the 1980s that the federal government acknowledged the unconstitutionality of Exec. Order 9906.
I'm glad to say that my students all know this fact by tne end of their US history course. Maybe someone in the movie should have told Parker? With all those Japanese American actors, I can't believe no one knew.
Posted by reb at 1:37 AM 5 comments:

More Stuff that's on the Web...

I feel weird moving on and doing more mundane blog entries after writing about Josie here, and after seeing everyone sharing their memories of Josie. Thanks everyone. I'm glad to provide a space for reminiscing about our friend. I still miss her.
* * *
In most of the hours that make up my days though, I am just plugging away on book revisions, which brings me to today's history website recommendation.
The FBI's FOIA idexes and files are now up online. So you can read as many FBI reports on the Sacco-Vanzetti defense committee as the bureau allows, which is a somewhat substantial number.
As a historian of the left, I've looked at a lot of FBI files in my time, and I'll say that despite their mystique, they are not such good sources. Often, they are just big clippings files. Very often, they spell people's names incorrectly, which just makes me doubt their seriousness. They get various sects and groups hopelessy confused too, and sometimes, I don't know what those secret informants are smokin.
However, occasionally there is something intriguing. Today, in secton 6a I came across a memo to J. Edgar Hoover (the first such memo to that personnage I've come across so far) suggesting that in 1922, Fred Moore, Sacco and Vanzetti's attorney had "solved the case" in S. Braintree. This is interesting 1) because you'd think that since the Bureau supported the Mass DA that they thought the case was already solved and 2) I may find some other info about it in the correspondence of said lawyer in my own old notes. And no, the Aldino Felicani collectionof Sacco and Vanzetti's papers is not available on line. It's not even on microfilm. More's the pity.
Posted by reb at 12:10 AM 1 comment: