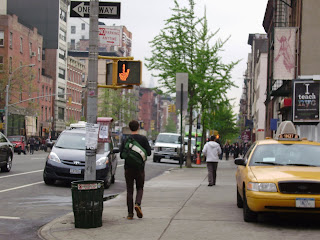 If only you could smell it 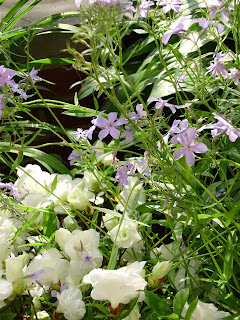 The gardenia has burst into bloom this week. 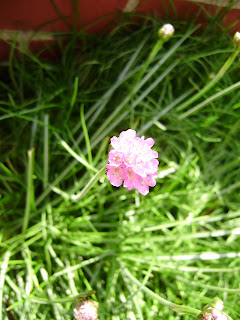 I think of this flower as a "Dr. Seuss Plant." Does anyone know what it's really called? 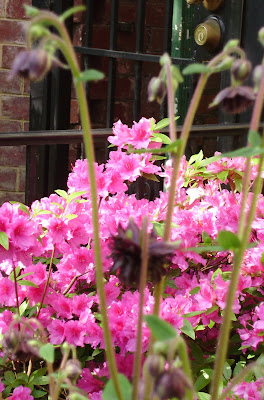 This columbine is close to four feet tall. What a surprise - it was puny last year.
Posted by reb at 10:02 AM No comments: 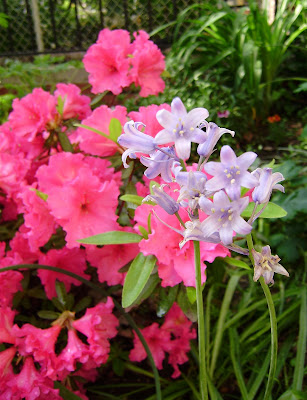 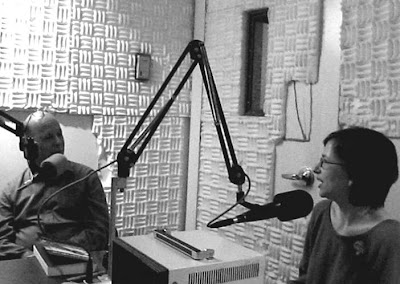 I started my TFF weekend with two films about Palestine/Israel: the feature film Salt of This Sea starring Suheir Hamad, in the blurry photo below. Later that I day, I saw Simone Bitton's documentary about Rachel Corrie, Rachel.
Both these films were very good. Salt of this Sea, which told the story of a Brooklyn-born Palestinian-American taking her own "Right of Return," could serve as an educational film about the Palestinian situation as a whole, but wasn't didactic. It was also visually stunning, well-acted, had an engaging story, and didn't include a ton of violence, which was a relief. The most ideological element of the film is probably the loving panning of the scenery of the once Palestinian Israel. It was a feat to make the film because it was shot by Palestinians and Palestinian-Americans in both Palestine and Israel. As the writer/director, Annemarie Jacir explained, in several scenes, they would keep shooting until the police would come and stop them. I hope that this film can educate people about Palestine the way that the musical Sarafina did about Apartheid. Pyramide Films is distributing it and it should be showing in U.S. theaters this Fall.

Simone Bitton's Rachel, was about terrible violence, and presented a much grittier, grimmer Palestine and Israel than the beautiful landscapes presented in Salt of this Sea. An exploration of youth and commitment, the film told the story of Rachel Corrie's death through the eyes of ISM members who were with her in Gaza in 2003. I was so struck by it in the beginning: we hear Rachel Corrie's words from her emails and diaries and then go to close-ups on the face of a young woman reading. "What is your name? " we hear the film-maker ask, and "How old are you? How old were you when you were in Palestine?" A few minutes later we see the earlier image of one of the readers, screaming immediately following Corrie's death. This film also includes testimony from IDF bulldozer drivers and interviews with Corrie's parents and teachers. Her parents have created a foundation in her name, which you can go to here.
One of the strongest parts of the film is the showing of a section of video from the IDF surveillance of the area. Here's what Bitton had to day about it when she was interviewed by Salon magazine:

I knew that in the Palestinian territories there are military cameras everywhere, the whole territory is controlled by camera. There must be huge operation rooms in military headquarters with screens, you know. Even in the old city of Jerusalem, there is one camera after the other, there is no dead angle. So I knew for sure that the Philadelphi corridor and all Rafah [the road and city where Corrie was killed] were filmed all the time by these military cameras.

So obviously there should have been a recording of the mission during which Rachel was killed. I tried to obtain it, and it was very difficult, but in the end I got a tape from the Israeli military and I remember the young soldier who gave me the tape telling me, "Oh, I had to work all night to get it ready for you." I don't know exactly what they did, but what is for sure is that we see a little bit of the mission scene before [Corrie's death], and we see after, but we don't see it happen. When I go very slowly, image by image, I can see that it has been cut. Also there are conversations between the soldiers on this tape, and these cameras have no sync. Obviously the sound comes from another machine; somebody had put it together.

If we were in a court, this videotape wouldn't have any value. But I'm in a film, and in a film it has great value. It's one hour into the film and we've been talking about these bulldozers, this group of young people, this house which was standing and now has been destroyed, and here it is -- here's the place, here's the house, here are the bulldozers. It's very, very strong emotionally and cinematographically, and I chose to have it in the film with commentary by one of the young activists. He recognizes himself in this very bad-quality image because he was wearing a white T-shirt and there's a white spot of somebody running in the frame. It's a very strong situation, to recognize yourself on the image of a military video camera, when you were not aware you were being filmed.

This film was really well-done - sensitive, probing, and very moving. I hope it shows in American theaters or on television.

Starstruck by Suheir Hamad after "Salt of This Sea" 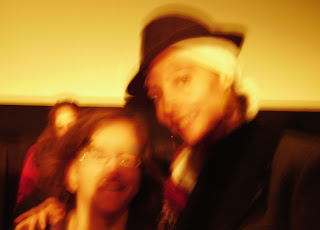 Last night at the Tribeca Film Fest, I hit the limit of my endurance. My boyfriend calls a certain look I get as I'm about to fall asleep, "sleepy face" and I think I was wearing that for the second half of "My Dear Enemy," a Korean comedy about a woman who comes to collect a debt of 3500 won ($2600) from her incorrigble ex-boyfriend. The film was subtle, enjoyable, and wonderfully acted, and I'd like to see it again when I'm more awake.
The drama unfolds as the two drive around Seoul, where the charming rogue of an ex-boyfriend borrows money from other girlfriends, acquaintances and friends in order to pay her back. Because of the series of vignettes with hilariously strange characters, the film reminded me of the classic 80s film, After Hours, although set in a lower key. The heart of the movie is the dynamic between the two main characters. I can't imagine a film like this being done in America, where "boyish" man / tough, unyielding females movies tend to be annoying and cliched. Perhaps it's a good thing that I was barely conscious for the ending, because now I'll enjoy it again when it comes out on DVD.
Posted by reb at 8:49 AM 1 comment:

TFF Film #7: The Fish Child - Under the Surface of a Femme Fatale

When I was in graduate school, one of my professors said that what you needed to win a Pulitzer prize for literature you needed was a certain combination of sensational plot elements including incest. I don't know if that actually fits the prize winners between 1992 and 1999 when I was in Graduate school, but I thought about this argument after I saw The Fish Child on Wednesday night. I don't mean to say that I didn't like it, but the film did pile on just about every bad thing: incest, murder, prostitution, and there's more but I don't want to give too much away. One of the principle characters was also crying just about every time she was on screen.
The Festival guide hooked me by comparing the film to Thelma and Louise. I also saw it because the director's previous film, XXY won the Critics' week grand prize at Cannes (that one's about hermaphroditism, so there may be something to this Pulitzer Prize formula and big film critics).
So, although I liked the movie I was disappointed because I was expecting an exciting and thrilling movie filled with humor and lively female characters. This movie was more dreamy, slow, and depressing, and the two female characters were troubled, secretive and often silent. The story is told from the point of view of Lala, the rich daughter of a judge who's romantically involved with her family's Paraguayan maid, Ailin, who's about to turn 21. At the beginning of the film, the judge is mysteriously killed, and for the rest of the movie we seek the answer to his murder, and to the "real" identity of the Paraguayan maid. At about one hour into the film I started thinking of Ailin as a classic "Femme Fatale" - but I liked how the movie then undid this "type" and explored her character's origins along with slowly revealing the intensity of the relationship between the two young women. The film was very well paced and since good drama should emerge from believable characters it got away with the soap-operatic plot elements. Since telenovelas also play a role in the film, perhaps this was an intentional commentary on the soap opera as a genre.
Posted by reb at 8:13 AM No comments: