Quote of the Day; Dennis Kucinich

I've been too busy to blog for the last year or so, but I had to throw my support to the all-too-imperfect Dennis Kucinich for his opposition to the bailout:

Rep. Dennis Kucinich: "The $700 bailout bill is being driven by fear not fact. This is too much money, in too short of time, going to too few people, while too many questions remain unanswered. Why aren't we having hearings…Why aren't we considering any other alternatives other than giving $700 billion to Wall Street? Why aren't we passing new laws to stop the speculation which triggered this? Why aren't we putting up new regulatory structures to protect the investors? Why aren't we directly helping homeowners with their debt burdens? Why aren't we helping American families faced with bankruptcy? Isn't time for fundamental change to our debt-based monetary system so we can free ourselves from the manipulation of the Federal Reserve and the banks? Is this the US Congress or the Board of Directors of Goldman Sachs?"

As I'm sure Kucinich knows, there hasn't been much difference between the BOD of Goldman-Sachs or their equivalents and the US congress for a very long time (at least not since the era of Alexander Hamilton) but it's still a good quote. Meanwhile...I'm glad we didn't let the Republicans privatize social security.
Posted by reb at 6:43 PM 3 comments:

From the West Indian Day Parade 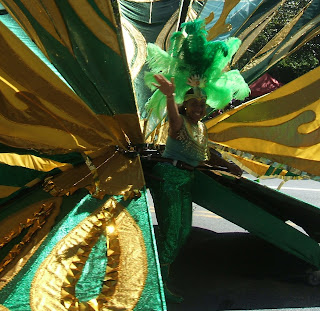