The U.S. Left and the Self-Own


There is always a risk to publicly criticizing a group you belong to if your group has a minority status in the broader society. These days, people like to joke that the left is always forming a "circular firing squad." The old name for it is airing dirty laundry in public. It is a real dilemma, as it's inevitable that criticisms based on internal differences will become weapons in the hands of a hostile majority. Here are some of the many examples of criticisms from within the left that have been adopted as right-wing and or liberal hammers against the left during my own life-time;


And yet, the ability to argue, to have rigorous internal discussion, and to acknowledge mistakes is vital to any project that is trying to achieve a goal. There must be room to address the replication of social hierarchies from the larger society within socialist organizations. Ideally those discussions would be an honest and fearless hashing out of a variety of perspectives in order to understand what is happening within the organization. In reality, those discussions often lead to anxiety, defensiveness, and can also be a an opportunity for power games and grandstanding.  Liberals and those further right will always seize on internal differences to score points. However, while there is probably no way to avoid having internal debates magnified and distorted from the outside, it does seem to me that there are better and worse ways, to engage in criticisms of left organizations in public.  I'm going to start with an example of what not to do, as exemplified by the recent circulation and commentary of some out-takes from the national DSA convention in Atlanta on the weekend of August.

You're Doing it Wrong

For those who haven't been following, here is what happened. The DSA live-streamed their 2019 conference. A few people who were watching found certain moments during the two days of political debates "cringe worthy." The first video clip that was held up for derision was an opening announcement of convention guidelines, edited with an acoustic guitar soundtrack. The rule from that clip most mentioned in left social media has been the use of ASL applause instead of clapping as a disability accommodation for people who might suffer from "sensory overload" and a quick reminder not to wear "aggressive scents" (perfume) in a "quiet room." The lefty side of the internet mockery chorus were much less likely to mention that these opening guidelines also included more common rules on the left: "don't talk to cops"; "don't talk to the press." The video clip that got the most push back was a 49 second clip during the discussion during which  a young man asks, nervously, and apologetically:  "Guys, please can we keep the chatter to a minimum?.... It's limiting my ability to focus," while adding that he is "one of those people prone to sensory overload."  Immediately after this, a more agitated person asks that people not use "gendered language," referring to the previous speaker's use of the word "guys." In the video, some people signal their agreement with these points by raising their arms and waving their fingers, the ASL method of applauding, sometimes called "twinkling" which has been used in political meetings to reduce applause interruptions for more than twenty years. No one at the meeting seems especially bothered by this, and the clip ends, presumably as the group moves on to discuss politics.

According to much left internet commentary, these clips are evidence of the total bankruptcy of the DSA. Here is an example of  some of the things said in the subreddit, r/stupidpol in the name of saving the reputation of the left from scorn: the two people making brief requests at the mic were described as "literal crying man-babies perpetually offended by everything."  Responses about what to do to fix the left included such a mix of joking wishes for them to be executed, as in : "we need the DSA-NKVD to rid us of these retards", and more practical speculation about how to exclude "these trash people" for the sake of the left's image:  "these people are an absolute joke and it is really embarrassing to share (some) ideology with them." "There has to be a process that weeds out retarded shit like this." Someone who claims to be defending the DSA because the people in the clip are not 'representative" of the organization does make clear that he shares the views of others in the subreddit by explaining, of the person complaining about chattering: "he sounded gay and I hate identity politics, so fuck that dude" 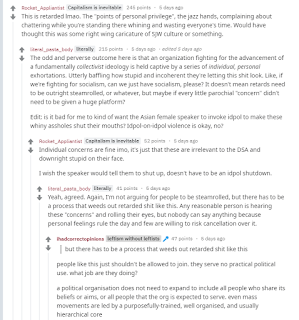 Redditors and others on social media went so far as to mock the  Robert's Rules phrase "point of personal privilege" as if it were a "narcissistic" practice invented by the "woke"privileged college students, or the DSA itself, rather than part of a guide to parliamentary procedure that has been used in a wide variety of contexts in the U.S. since 1876. (Hell, they even joke about Robert's Rules on the Wire.) The fact that people did "jazz hands" and didn't just immediately tell the two men to shut up was evidence that the DSA was "spineless" in the face of "bullies" and had been "hijacked."  This mockery was being done in forums where people supposedly identify as socialists.

The result of the hyperbolic representation of this "embarrassing-to-the-left" video was that it went viral. In other words, it was a colossal 'self own' if the goal of the Stupidpol people and their ilk was to avoid having something they were embarrassed by be used by the right as a weapon against the left.  It's doubtful, however, that this concern for the left's image was really central to these folks, since Stupidpol brought the clip to the attention of 'left conservative" scold, Angela Nagle, who went on to Tucker Carlson's show to join him in mocking the DSA for being narcissistic, privileged weirdos, perhaps more palatable terms for a TV audience than the Stupidpol's favorite terms;  "gay," "memtally ill" "autistic", "retards" and "fags"

What can be learned from this episode? Some suggestions for dealing with being annoyed by things that happen at meetings

When annoyed by something in a meeting, stop to consider:  is the behavior that bothers you hurting someone? If not, why is it bothering you so much?

It would have been nice if the people on Stupidpol and similar sites had explored why seeing someone ask for an accommodation bothered them so much. The people mocking the DSA clips are full of emotion and catastrophism. They express contempt, disgust and disdain for people who they describe as weird and weak. You can see this in the use of adolescent terms of derision: "fag," "retard," and "gay," which suggest the people are weak and not masculine enough.  The redditors are doing as much as possible to distance themselves from association with behavior that they see as personally embarrassing, when they imagine other people looking at them and judging them by association.
In her interview with Tucker Carlson, Angela Nagle describes the pathology of people asking for accommodations of invisible disabilities as "bourgeois narcissism." However, in psychology literature, it is not expressing vulnerability, but  expressions of contempt, disdain, and disgust that are identified with classic narcissism. What is so upsetting to me about these threads is that the mockers call for the DSA to share their mean-spirited views of people in the organization in order to be real socialists. They identify the meeting's decision to err on the side of sympathy and generosity with people who seem weak and "uncool" in other settings as itself 'weak." The representation of left disability activists as unpleasantly vulnerable suffuses Nagle's book Kill All Normies, despite her purported friendship with the late Mark Fisher, who himself advocated writing more, rather than less about why mental illness (an invisible disability) is a political issue.. If you find yourself wishing for a "tougher" socialist organization that would put such people in their rightful places, maybe you're reacting because challenging existing norms, regardless of their political consequences, makes you uncomfortable.
If you argue, "no it isn't hurting me, it's hurting the cause of "THE LEFT" note that this claim is used disingenuously all the time. People say that a lot of things hurt the left, including whatever your agenda is. Dig deeper and explain why, in political terms that don't include juvenile insults.

When something is hurting someone, maybe even you, what the most effective way to deal with it?

Of course it could be that you are feeling annoyed because someone's behavior is hurting someone, maybe that person is you.  If that's the case, try to address it in a constructive way, directly with the person who's doing it, at a time and place that will deescalate the situation, with compassion that recognizes their point of view. Also, ask yourself if this needs to be addressed RIGHT NOW (to the extent of interrupting the discussion at hand) or can it wait till later? People are often annoying. You are also annoying, to someone.  Decide how important the annoying thing is before going ballistic.That doesn't mean it never has to be addressed "right now" or that your "right now' will be the same as everyone else's.  If you happen to be on the other end of that from someone else - like someone else decided that your use of the word "guys" was inappropriate, are you so bothered that you need to make it a big deal, or can you accept the criticism and move on? It may be that some criticisms are themselves harmful. There's just no good rule except to give people the benefit of the doubt and try to act with consistent political principles in mind.

What purpose does this serve for the group?
If you are making criticisms of a group or a person in it, ask yourself what larger purpose it serves the organization.  Will what you are asking improve the organization?  Have you lost sight of a larger goal because you want to be right? Are you trying to punish people for harms done to you in the past? All these things happen in groups for a variety of reasons, and no one ideology is exempt.

Consider the consequences of public statements
I wrote most of this with public meetings in mind, but it's also something to think about when writing about internal conflicts in groups. Consider the consequences and implications of what you're saying, and writing and how these will be read by unfriendly audiences as well as by friendly ones. Since it's likely that you'll leave something out or say something that from someone else's perspective could contribute to something bad, be willing to seriously consider criticism when you get it

OBVIOUSLY, IN CLOSING:
Don't take your BS to Fox News, or to CNN, or the Atlantic, or any other media source that doesn't give a shit about building the left. If it gets to those places, only go there to dispute right wing or liberal misrepresentations of the conflict.

Posted by reb at 10:34 AM No comments: Links to this post