If 50,000 People Demonstrate in Front of City Hall and the NYT and Daily News Barely Cover it...Did it Make a Sound? 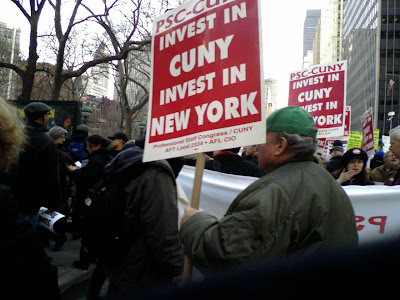 Yesterday, nearly 50,000 union members, students, and families demonstrated for "fair share tax reform" in New York as an alternative to the huge budget cuts and sales tax increases currently being proposed by the governor and the mayor. At CUNY the current cut proposals are backed by tuition hikes for our students, the majority of whom come from families making under $50,000 /year. The majority of those tuition dollars won't even go to CUNY, but will fill gaps in the state budget. Check the budget fact-sheet here. In other words, the governor would rather tax the poor than tax the rich.
The "fair share" plan, sponsored in the legislature by assemblyman Eric Schneiderman, would roll back tax cuts for the wealthy that were passed over the last thirty years. This strategy would eliminate about half of the current state budget deficit. Despite the fact that most city unions support it and despite the fact that several legislators in the NY state assembly and senate support it as well, the proposal has barely been covered in the city's major newspapers.
In today's New York Times hard copy, there is a photo of the protest with the caption "A tax and spend proposition," and there is a brief item about the rally in the "City Room" section on the NYT's web-page. The New York Post had a very brief item on it, and the Daily News had nothing. What were the more important news stories that edged out a public response to an ongoing policy debate? If you check the regional/local sections, it appears the NYT thought that the sale of Gandhi's sandals, eyeglasses and pocket watch was more news-worthy, while the Daily News featured a lengthy article on Svetlana Pankratova's leg-shaving for charity. (In contrast, NY1 (linked above)and The Gothamist gave the rally more in-depth coverage. )
This rally, and the debate about the "fair share" reform bill deserve more coverage from major newspapers. After all, polls on this issue continue to show that the majority of New Yorkers support some sort of tax increase on the wealthy as an alternative to service cuts and regressive sales-tax increases. But if you check the NYT for articles about this reform proposal, which now has 22 supporters in the state senate, you won't find much.
Instead, people scratch their heads on call-in shows and write on blog comment boards about how the city is going broke because of over-paid public employees. Could this be because instead of reporting on what the majority of New Yorkers think or experience, the paper of record acts as a stenographer for the Republican mayor and the NY business interests represented by the "Citizens Budget Commission"?
To say that 3% cost of living raises "out-pace inflation" in NYC is laughable. That NY public-employee salaries are higher than average private sector salaries reflects the fact that NY's economy is fueled by a massive low-wage workforce (who rely on services provided by these public employees), while the fact that NY public employees make more than other public employees is a consequence of the high cost of living in NYC. Instead of bringing down those low-wages and cutting services to poor New Yorkers, the "One New York Coalition" that organized yesterday's rally is calling on the top 3% of New York earners to pay their fair share in the midst of a major budget crisis. Go to the Professional Staff Congress website to write a letter to your legislator urging support for Fair Share Tax Reform in New York state.
Posted by reb at 9:59 AM